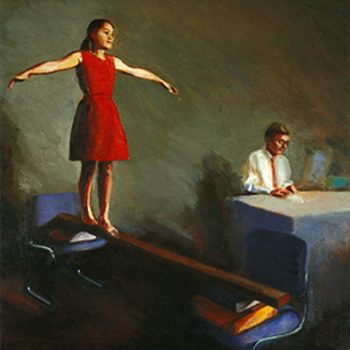 rhttp://www.jeremymulvey.co.uk
Jeremy Mulvey is an artist who lives in Cambridge. He specialises in oil paintings of a surreal nature. Mulvey undertakes general painting commissions and portraits and shows regularly with the New English Artist Club in the Mall Galleries, London. He is a highly experienced teacher and gives painting classes in Cambridge and one-to-one tutorials throughout the year.

Jeremy writes on art and art teaching and has a particular interest in issue-based art and the topic of masculinity. He has given a number of lectures at the Fitzwilliam Museum in Cambridge And in June 2019 was interviewed on London radio on FM Resonance about his art and his engagement with theme of masculinity and gender politics. He is interested in how the visual arts can stimulate debate and envisage possible futures.
2017 Expresso Library Cambridge

Still Life with bread and ham

The Pull of the Mountain [Sold]

© 2019 All artwork images are the copyright of each individual artist